Why Students Should Study Latin

Why Students Should Study Latin

If you’ve heard it once you’ve heard it a million times … why study Latin? Latin is a “dead language”. It might not be a conversational language however there are numerous benefits to studying Latin.

We all know the big ones: Spanish, French, Italian, Portuguese, and Romanian. But most of us are completely unaware of the minor Romance languages: Catalan, Corsican, Lombard, Occitan, Gascon, Piedmontese, Aromanian, Sardinian, Sicilian, Venetian, Galician, Asturian, Neapolitan and Friulian. These languages derive directly from Latin. Some estimate that 90% of their vocabulary and grammar are of Latin origin. Learn Latin, and the pain of learning any of these languages diminishes dramatically.

2. English is derived from Latin.

Ok, not really.  English is a Germanic language.  It is not a Romance language.  But English was heavily influenced by Latin.  At least half of our words are Latin.  Even better, as much as 90% of our multi-syllable words derive directly from Latin.  We use the smaller, common Germanic words 80% of the time when we speak.  When we write, speak publicly, speak formerly, or need precision in our language, we reach for the power words. We reach for Latin.

Looking for a Latin curriculum?​

What is the best way to learn Latin?

Unfortunately, these authors are the Shakespeare’s of the Latin language.  Imagine learning English this way.  You learn the fundamentals of the language and then finally after all your effort for months, maybe years, you are handed a copy of Shakespeare’s plays.  I am a fan of Shakespeare personally.  But I cannot imagine facing that type of writing in another language immediately after learning the language.

Yet this is exactly what we do to Latin students.  After teaching them the fundamentals of the language, we hand them Caesar, Cicero, and Virgil. We give Hamlet to a 2nd grader who has just learned to read.

Dwane Thomas is a Latin magician: he’s spent over 15 years turning students into Latin speakers and readers. His secret? He’s one of those unique teachers who makes learning difficult subjects fun and enjoyable. Thousands of children have already been transformed through his magic: let yours be next.

There is a better way.

Dorothy Sayers was a famous English writer.  She was a member of the famous inklings club with C.S. Lewis and J.R.R. Tolkien.  In an article about her own Latin education, she shows the better way.  While the tradition is to go from the basics into the highly stylized, elite, polished writing of the most educated Romans, Sayers takes an opposite approach.

Why not start with the easier, more accessible Latin of the Vulgate and the Medievals and work back toward the more difficult Latin?  “After all,” she says, “that is the natural way of learning any language – to begin with the more modern and go back to the more ancient, even if the ancient is the more noble.  It is true that many people, if started upon the Medievals, would, in this hurried century, never have time to go further.  Even so, would half a loaf not be better that no bread?  Their training in the Vulgate would not enable them to write like Cicero; but it would enable them to write Vulgate Latin.  After all, few of us actually ever succeed in writing like Milton or Dr. Johnson; but to write like Conan Doyle or Elanor Farjeron is better than never learning to write at all.”

This is the reason I use the Latin Vulgate Bible in Visual Latin. It’s also the reason I like Lingua Latina so much. Both use Latin that is much more accessible for students. After all, to get the benefits of knowing Latin, one has to learn the language first. In my opinion, some ways are better than others.

Already have Visual Latin and want to teach it more effectively? Head to our helpful overview and resources collection page. 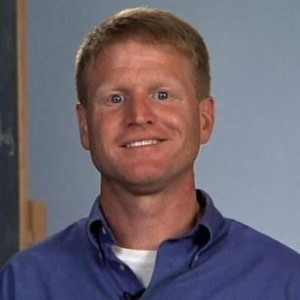 Dwane has been studying languages for most of his life. He grew up in Europe surrounded by the Dutch and German languages. For almost 20 years he has been teaching Latin in the classroom and, more recently, online. Dwane and his wife have three wonderful children (there are five in all, but only three of them are wonderful). He and his wife homeschool their children, which means they both drink more than their fair share of wine. Featured in Visual Latin and WordUp!
More from this Author

Dwane has been studying languages for most of his life. He grew up in Europe surrounded by the Dutch and German languages. For almost 20 years he has been teaching Latin in the classroom and, more recently, online. Dwane and his wife have three wonderful children (there are five in all, but only three of them are wonderful). He and his wife homeschool their children, which means they both drink more than their fair share of wine. Featured in Visual Latin and WordUp!
More from this Author