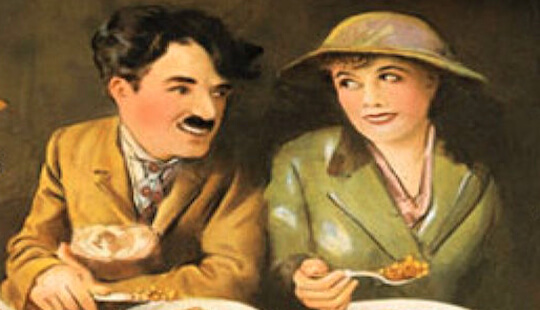 It’s practically impossible to be a really good filmmaker without having studied the great filmmakers of the past. Filmmaking is not simple. There are countless moving pieces and possibilities, so one must learn from those who spent years working on their craft. Many of the greatest filmmakers were making films before 1960. I always encourage young filmmakers to start there:

1) Charlie Chaplin’s Mutual Comedies (1916/1917) – [Principles: Comedic Setup and Timing] Charlie Chaplin was given a young filmmaker’s dream right at the start of his career: almost limitless money and complete creative control to make whatever films he wanted. The result was a series of 12 short films that are a perfect study of comedic timing and setup. Purchase the full set.

2) Sunrise: A Song of Two Humans by F.W. Murnau (1928) – [Principles: Action demonstrating character] I think Sunrise is the greatest silent film ever made, if not one of the greatest films of all time. It is so amazing because of the way it shows the redemptive nature of love. Many people believe that words demonstrate character, but everyone inherently knows that actions speak louder than words.

3) La Grande Illusion by Jean Renoir (1937) – [Principles: Character, Mise en scene & Acting] – Without a doubt, this is my favorite film of all time. Renoir’s understanding of the subtleties of character and framing is as great as his more famous father’s understanding of the subtleties of light and shadow. He is a true gentle realist, who seeks to show the beauty of life in all its momentary splendor. This is an action film, a buddy film, a romance film, a comedy, and a tragedy all in one – just like life itself.

4) The Philadelphia Story by George Cukor (1940) – [Principles: Dialogue & Story] – The late 1930’s introduced a new kind of humor film called the screwball comedy (aptly named from the baseball throw that could suddenly shift in any direction). The best are phenomenal examples of tight, sharp dialogue running through a story with continual hairpin turns.

5) Citizen Kane by Orson Welles (1941) – [Principles: Story Structure, Writing, Editing, Sound (and much more)] – A 20-something Orson Welles said he watched John Ford’s Stagecoach over 20 times to understand how to make a good film. He went on to direct what is considered by almost every critic to be the greatest film of all time. It is, however, one of the most curious and complex films ever made: a non-linear plot, tautly-complex writing, exceptional editing, and a soundscape that could only be created by a brilliant radio expert (Francois Truffault apparently pulled out only the audio of the film and would listen to it as he got ready in the morning). There are countless things to learn from Citizen Kane – but they don’t come easily. Unlike Stagecoach, it is a wildly difficult film with a seamlessly labyrinthine structure.

6) Hail the Conquering Hero by Preston Sturges (1944) – [Principles: Dialogue & Stock Acting] – Preston Sturges was one the most famous screenwriters in Hollywood in the 1930’s. In order to step into the coveted role of director, he apparently sold a screenplay for $10 in order to be able to direct it. This was the first of a run of 7 films he wrote-directed that are some of the funniest films from the early 1940’s. The last (and best) was a mistaken identity film that gets ever more convoluted and silly with every new plot point. The dialogue sparkles as only Sturges could make it sparkle, and it’s delivered by his standard cast of characters which appear over and over in his films. He basically created his own stock group of actors that knew each other and understood well how to work with each other. Timing is everything, and Sturges had it.

7) The African Queen by John Huston (1951) – [Principles: Action & Conflict] – A great study of interpersonal conflicts overcome through common goals: first survival, then romance, and finally revenge. It follows the classic Hollywood three-act structure but is a great example of how the action works itself out through various inter-related conflicts.

8) High Noon by Fred Zinnemann (1952) – [Principles: Plot and Relationships] – A morality tale in the form of a Western, where you see the interplay of relationships building toward the necessary climax. It is not the classic action/chase, but rather the slow build of tension toward impending doom. The plot hinges on the responses of real people in fear for their lives, and the ironic struggle between selfishness and selflessness.

9) Rear Window by Alfred Hitchcock (1954) – [Principles: Suspense] – There was no director who could consistently build unrelenting suspense in almost every film he made. When commenting on Vertigo, he said he would play the audience like a pipe organ – and he did. His scenes push our buttons in ways that no other directors have ever done so effortlessly and so effectively. He also loved to do the impossible: in this case, film an entire film from one room looking into one location. It is a masterpiece.

10) To Kill a Mockingbird by Robert Mulligan (1962) – [Principles: Based on a Novel] Hollywood is notorious for taking a great novel and transforming it into a mediocre movie. The general rule is that a bad novel can make a good film, but it is a far more difficult thing to transfer a complex, well-loved story into a simple film. Part of the challenge is often that the screenwriter departs greatly from the feel of the story while necessarily changing some aspects of the story.  This film, however, is the quintessential example of how a book should be transferred into a film. (To understand what Horton Foote did, you should read the book before seeing the movie.)

These, of course, are just a few films that should be studied – there are countless more. It is very important for the current filmmaker to be nourished on a diet of old films as well as new. I would go so far as to follow C.S. Lewis here, that for every one new film you see, you should watch three old films. You will understand filmmaking far better by doing this.

Filmmaking from the First Directors teaches the basics of filmmaking and early film history. It takes students through a unique journey starting in the late 19th century when film was invented, then guides them through the steps first directors took in creating the modern language of film.
Learn More